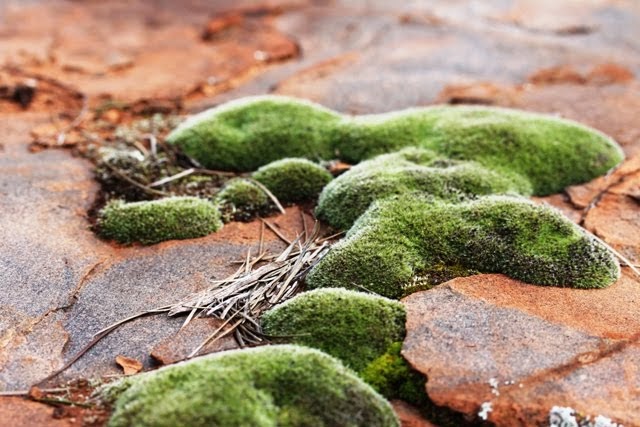 Its was hot and muggy yesterday and most of the week,today? its quite cool,well I have freezing feet and will be in trackies later I feel.
Today..went too fast,got out a bit later than usual,I could hear the on and off showers and a bit of wind,the washing was still on the line and son no3 work clothes and mine were in among it.Feeling a little seedy after a late night ,a good friend birthday bash as boys house,I only had a nip of that American Honey with a bottle of beer so I doubt that did too much harm but its almost a tonsil sort of offness,its getting around so with luck we ll make it through the going back to school illnesses as everyone congregates in one spot again.Son 5 is on teh bus ,the best bug picker upper. The Principal we have this year seems ok,very interested in the interested sort of way in the grounds so i hope he appreciates my efforts,dont go much on new assistant,too many health issues and his habits are already annoying me,never mind it will be a good year I insist on it.
Finiahed well this is the preliminary pic of the first Pay It Forward 2014 works,it went like this " I promise to make a small art work and send to the first five people who reply to post who then copy and post on their page" I have three replies and two works done 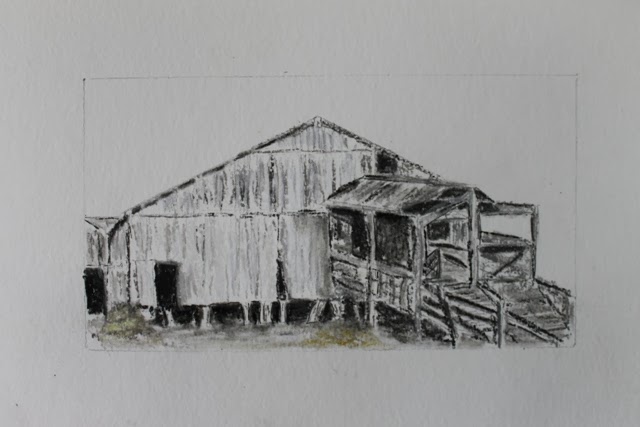 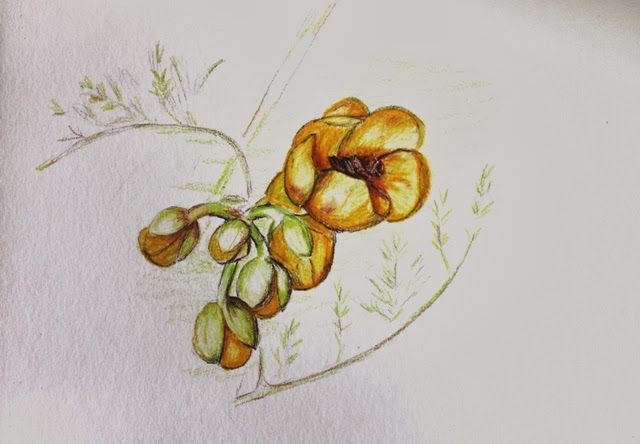 Punty Bush (Casia)
And the weaving peice is off the loom,just have to cut  and sews ends 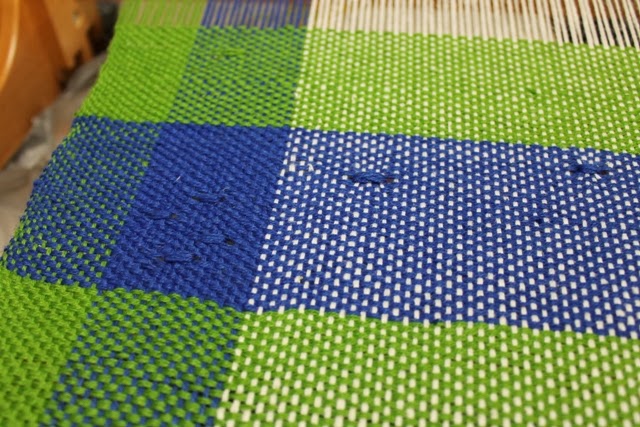 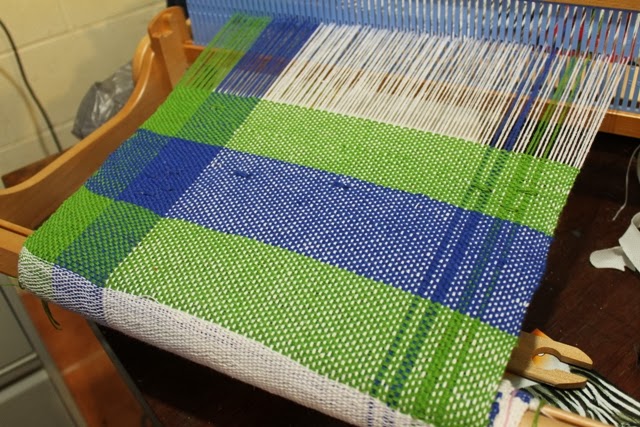 This is the end bit,I trippled the weft and its more closed in weave,the first section is a bit open but a wash  and dry in dryer may pull it together,wondering if I rewarp loom with the 12 DPI next or wait and get some 8ply cotton from Bendy for a thicker ones. The last bit pictured is an experimental piece,Ill sew ends under and use it as a table centre topper,I played with some texture there too with a few random bobbles,thinking of adding lazy daisies! Hmm its fun!!
Posted by Unknown at 01:26 1 comment:

Nothing exciting,i took a day off ( (I worked the longweek end Monday due to miscommuncation from trades people,he apologised of course but that didnt help the fact i lost my last real day off) anyhow I took today as a personal leave to take Son no5 into his college to pick up and pay his book hire etc,end up spending $280 on uniform,260 odd on extra books hed handed back that I had to buy again( he should have held onto them) I indulged in a new Crochet Book when I ordered his Jacaranda Atlas, nearly bought a second novel too but will wait til Ive finished the last Dan Brow book,Ill send my new books to my SIL if she wants them.
I read a blog today
http://thatcrazyquiltygirl.blogspot.com.au/
she has the most fantastic quilt ,made in the pattern of crop circles,now I want to do one too,after ive done the Rothko one of course...
On the Good News side, if its good at all, but certainly could have been worse,Son is home,he indeed broke his back,sounds terrible but his words,hes wearing aback brace for next three months to help fractured compress disk to heal,the break in upper arm awas the part just before the "ball" on the bone,so they had to put ball back into joint(dislocated) then plate the break,he is black and blue but fairly happy,Im not sure if its the intial wont be at work for three months or the fact boredom hasnt set in. He informed me this moring that he thinks his jersy is still out in the bush but its ripped up so no matter.  3rd of January 1990 I lost my beautiful baby brother when he collied with three roos while out checking the water on our station,I think this is why Son 1 ,said sorry more than once while waiting for ambos,but only son 3 actually roused later when everyone was gone that they werent considerate of me, the stress of this has only just started to set in,as soon as Ive trained up new man at work Im drawing a few days off , I look at Son 1 now and shake me head and am thankful hes here and jovial,he can come to town with me anytime while hes healing. No doubt it will be one of many more accidents to happen and having five boys just more than doubles it.
My new book!! 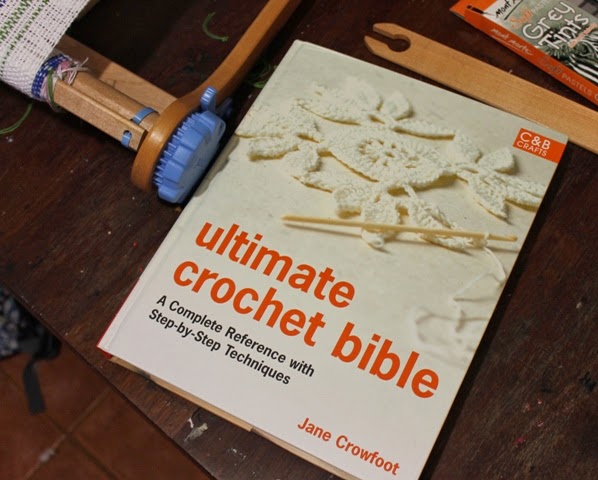 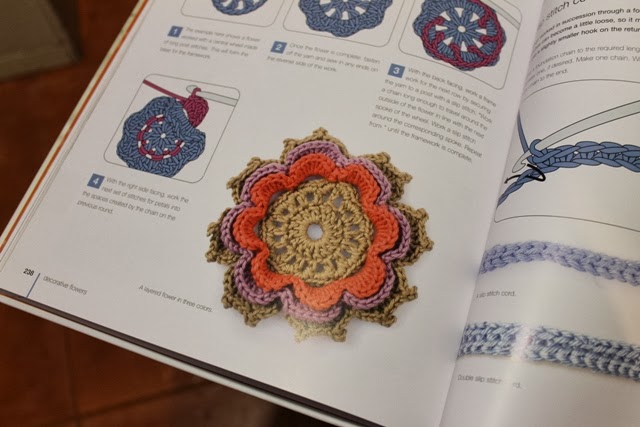 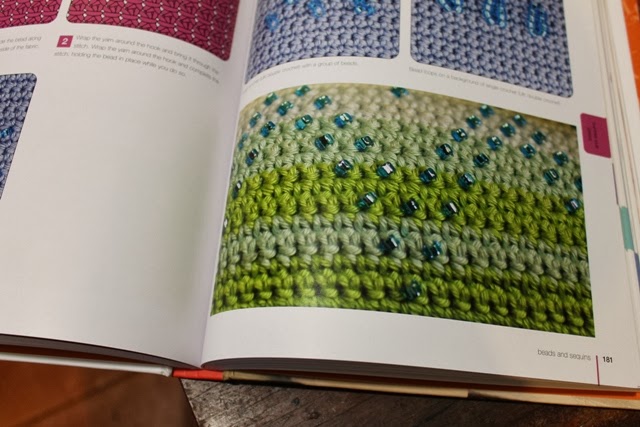 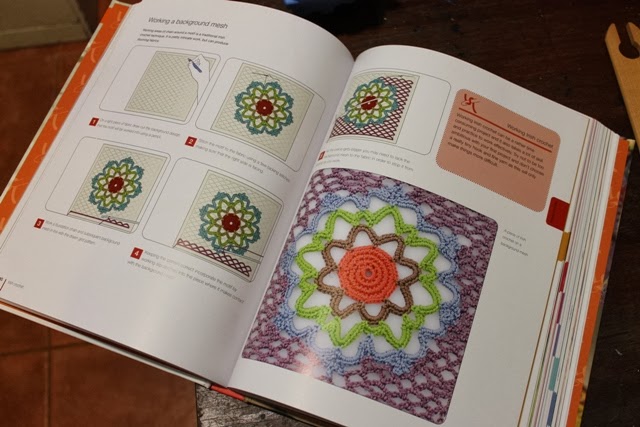 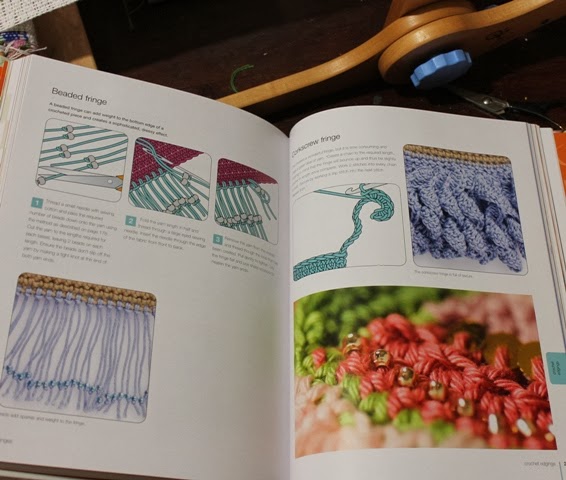 That optim yarn has changed its color, 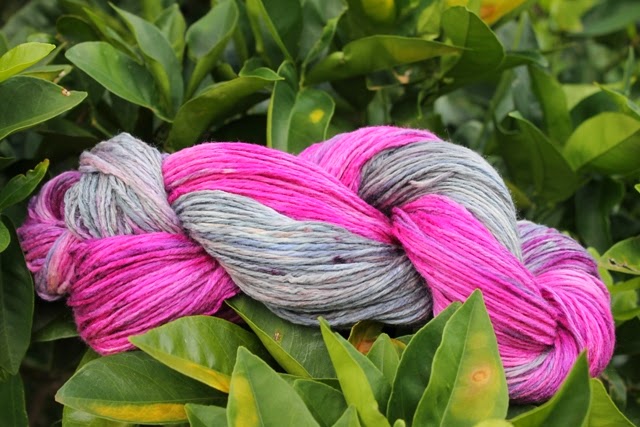 much better I think the next time I spin this stuff Ill do natural then dye......
the storm that gave a taste of what it had in smell and cool winds 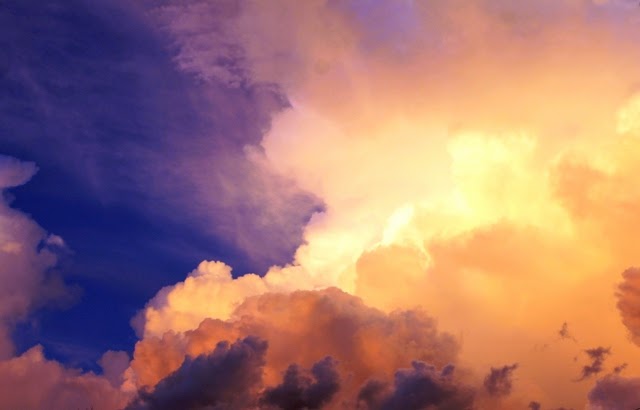 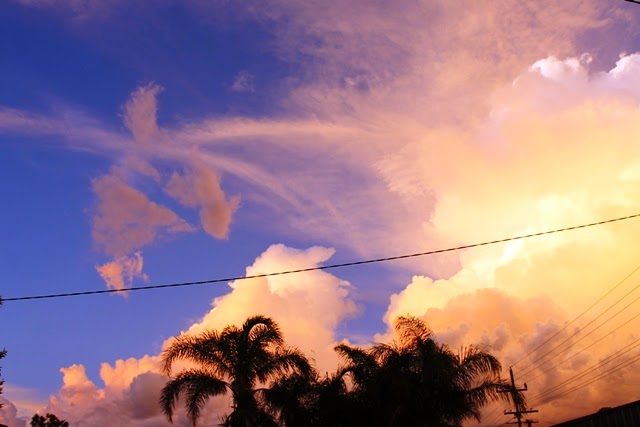 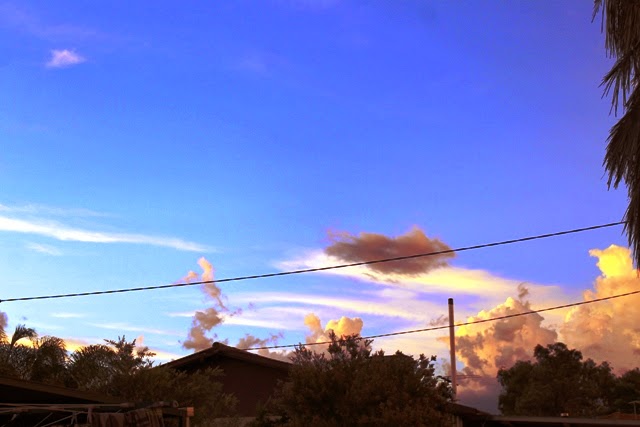 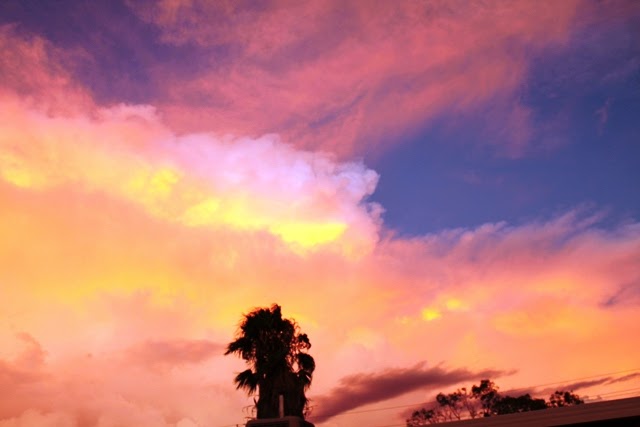 Well the days nearly over,Im still here looking at this and that,determined the bird who has taken over my even growing garden is none other than this beautiful singing little fella
Grey Shrike-Thrush with photos here, In the first link there a recording,i worked who he was from searching through the Birds Australia
It would appear he and his mate who Ive never heard or seen have taken possession of our garden and severals others as they have a territory of some size and mate for life as well,I surley hope that pesky cat next door hasnt knocked off his mate cause hes doing an aweful lot of calling from day break to around 11 then in the afternoon to dusk.
The frog are really belting it out over in the swamp behind us,Im going out this even ing to see if I can get a recording of the spotted thigh frogs http://frogs.org.au/frogs/species/Litoria/cyclorhyncha/ On this site theres recordings of frogs in this area,scroll down to find this fello,we also IDed the Shoemaker and another couple
Yes I love frogs,Im currently still setting up a corner in garden where I can establish a froggy motel,would ideally need a large camp oven like this,still holds water but no good to cook with,cant waste a good oven,lol. My reason being memories of the one that sat in the garden under the big plum tree,there was hardly any cover except for shade and boy didn't the green tree froggies love it,taddies all summer.
On the other front the day was turned very warm and muggy with weather warnings for wild weather ,yer right,hail wind and storms for us,the area within/compassing Yalgoo to Kalgoorlie through to Norseman and Southern Cross.Theres a couple very heavy storms passing through Norseman,will be interesting if any form and come through here,Ill have to dash out and put away the bags of fleece I have out drying from the flood last Wednesday,only a bit at base of a couple bags but wanted to see if I could get the collected moisture out of another couple bags,theres a prise winning fleece from Wagin  as well,the bag has rotted so Ill be grabbing a few large bins from Kal,Ill have time to do something with them later as wool doesnt really decay,a wash and card and it ll be fine.
Weaving,got the cotton,still waiting fro new reeds but have warped and trying this 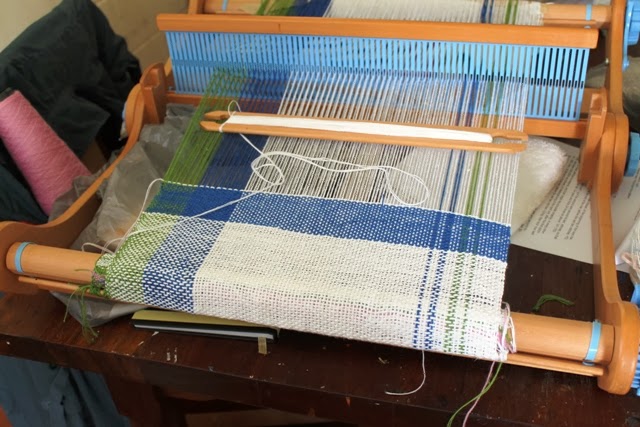 not happy with the weave itself it a bit open,using Cotolin.60 cotton 4o linen,the new reed is a 10DPI which should be a closer match,Ive doubled the yarn both warp and weft but still not suited to the 7.5.Ill finish it .weave singles for end and cut off,then roll ends and sew,even if I only use as cleaning cloths it wont be wasted. dying to do an arty one as a table centre.I ordered these colors from ashford Australia,beaut service,kept in contact and were quick,Id started an order with Petlins for similar colors but stopped completing order as they wanted it faxed through when I wanted ti use CC instead of Paypal as I hadn't topped up that account,bingo a parcel arrived with the white and lighter shades of green and blue,no idea where the moneys come out,Ill check accounts again on Tuesday and will ring them too as theres a couple other bit i want yet.Need a second 5DPI and a pair of 12DPIs to weave thick arty stuff and fine lace weights (re Wollmeise lace I have stashed),Im hoping they dont sent bailiff lol.
Got busy yesterday and made Plum Jam,from this recipe, it was simple and fairly easy,its more like preserve though and it sort of soaks into the bread,toast is ok,I got three jars of the dorito sauce size. You can tell it shop bought fruit,it lasts the zing but Im not going to complain,it felt god to be cooking something that was part of life in the bus,next will be fig,from dried figs,this recipie at the shop,not sure about impoted fruit but it be fun either way,after that Ill make another batch of apricot but might cheat and add pectin this time. 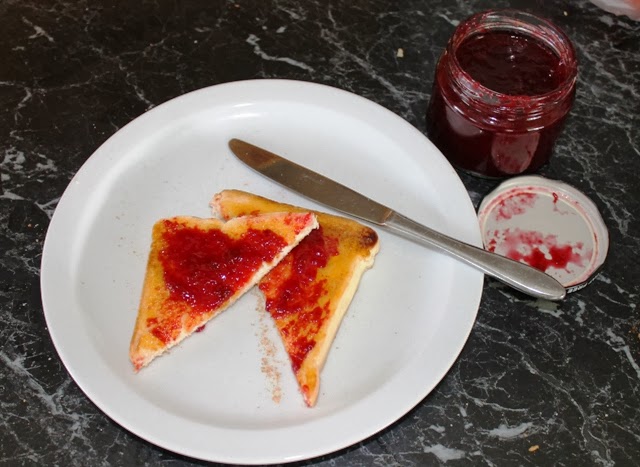 finally broke and balled this optum up,dont go much on color,going to sit and look at it ,maybe Ill redye it raspberry and grey or purple and orange,dont know gloriously soft,buggered up the plying,somehow over the three years or so it sat on the wheel i spun half back to front,lol 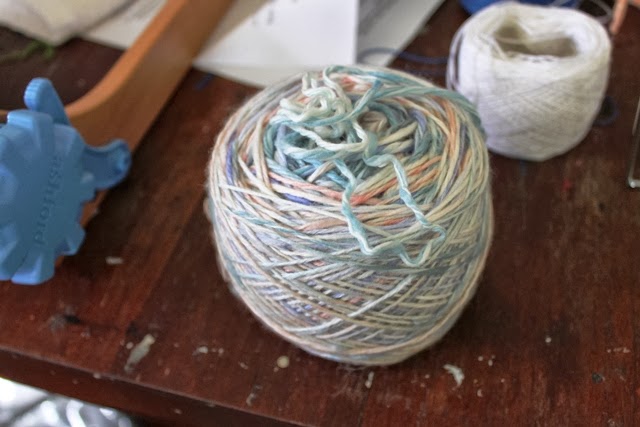 And some bunny pics,both were sitting out in the green"acrage" foraging as bunnies do but heard me and split up,Miz buuny coming over to see what food I had and Fluffa sat for a mere second before disappearing past me to his camp spot,I think I needa few more to keepup with lawn 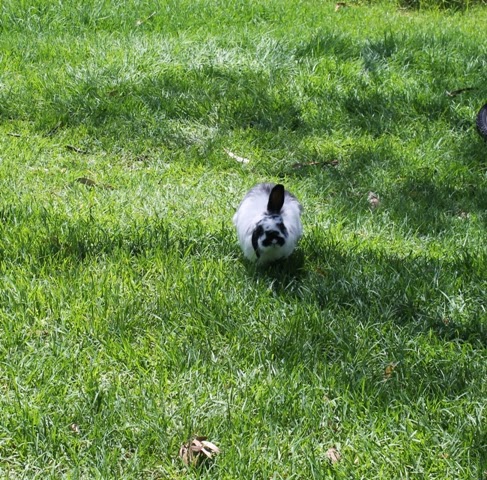 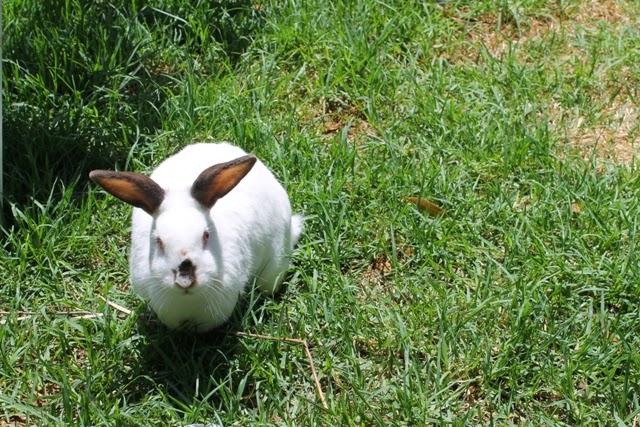 The town is cut off for a few hours till the main body of water drains away,a lot of people are complaining but really it doesnt happen like this often, even Cyclone Christine are pretty good,heavy rain for a few hours. Hubby and a few mates went canoing down that big stream,a couple of them had a drink or two meaning capsized lol.Hubby lost a paddle and his newish akubra hat 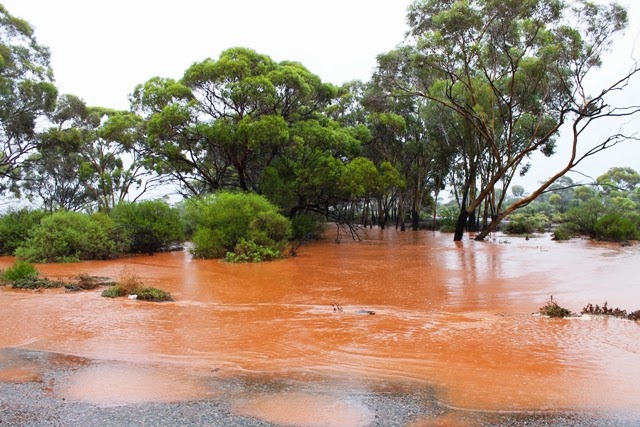 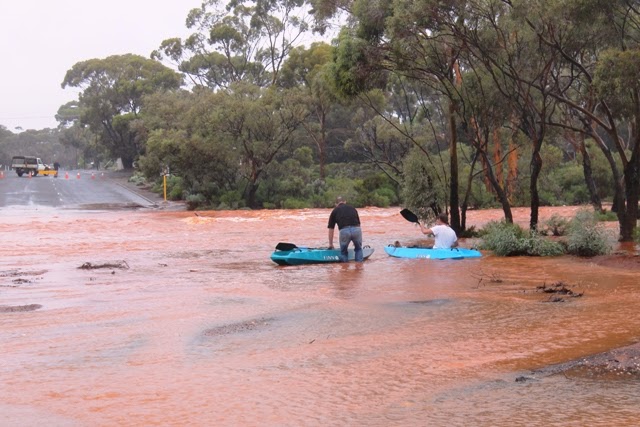 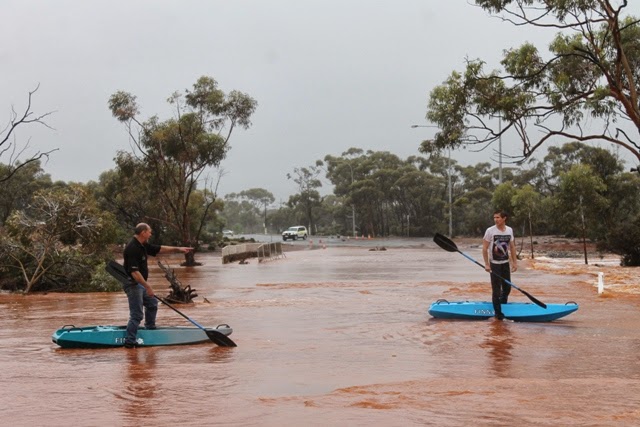 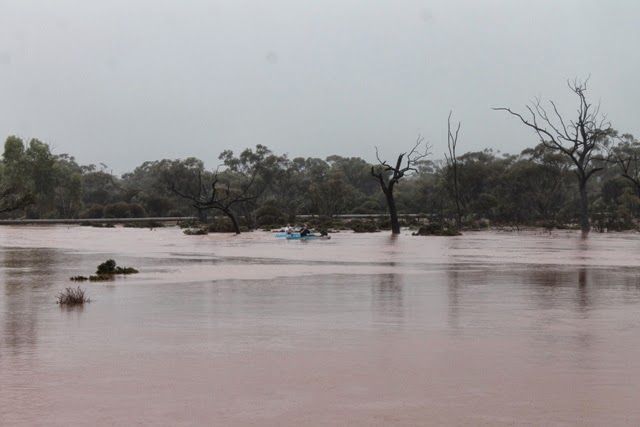 This was from a deep low that passed over us from Tuesday night til now,water everywhere,Frogs are gong bonkers!
Posted by Unknown at 23:23 No comments:

Its one of those seasons that just surprises and surprises,its been raining gently to moderately for nearly 24 hours,glorious,I have been able to put jeans on with my fav Susans cardie,old but faithful and my latest knitted sock from EGMTKs,the blue beautiflly soft ones I designed myself 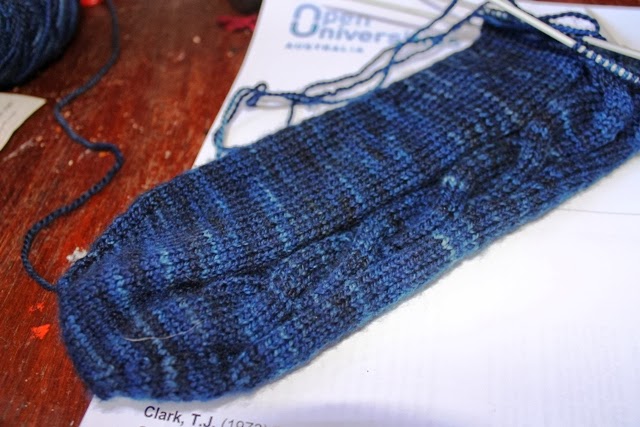 Havent taken a pic of them finiahed yet lol have to wsh them again,but very ahppy with them
Im looking at this pattern for something unusual should try it in DK for lighter wear in Australia
Feeling a little stressed this afternoon,Son No 1 was flown out to Perth this morning after crashing his bike,nasty break on the high near his shoulder on top of the same arm being dislocated,with no suitable doctor in Kalgoolrie he was flown out this morning,I didnt see him off as I thought they were going early,feeling a failure as a Mum for not going in but problem with other son as well caused a bit of overload,I hope hes ok,(of high spirits unless it was for my benefit) and they operate fast,he seems to think he ll be able to fly home on Friday but I doubt they ll let him on the plane so close to surgery, Im sort hoping I can drive down,even just to get away from this place.
Theres a nice lamb roast in teh oven and Im off shortly to go into Kalgoorlie to pick up other son from mine bus...

Im an artist,I dabble in everything from knitting,spinning weaving and photography